With illustrated chapter books, the dark fairytale series, The Balderdash Saga, is ideal for kids as young as 6 and as old as 13, depending on their reading level and parental involvement. An immersive experience, comprising three books and several short stories in a world that your kids will love! 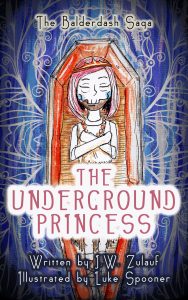 Not all fairytales are about beautiful princesses and dashing princes. Some are about the corpses living below our very feet….
~~~~~
Princess Scarlet is on a journey to find true love, but a malevolent force, Maleer, is in the process of dethroning her father, King Hurlock. Maleer intends to rule the underground kingdom of Balderdash, build an army, and break through the ground to invade the land of the living.

As Scarlet runs out of options to save those that matter most, she is forced to make decisions that will determine the fate of her entire kingdom.
~~~~~
Meet many friends, and a couple foes, on your visit to Balderdash. Whether you’re searching for true love with Princess Scarlet, or fighting for honor with Roland the pirate knight, there is something for every reader within this coffin tale. 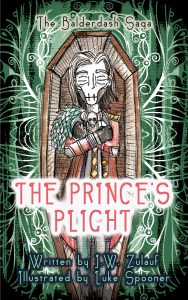 After defeating Maleer, the people of Balderdash work to expand their kingdom by exploring the vast caverns in search of more graveyards. Although Hurlock and the shaman have adopted Kaylan, few in Balderdash trust the prince. Scarlet barely speaks to him, and Screech is the only one to show him affection. To escape the tension, Kaylan unofficially joins the Spelunkers, a group created by the shaman tasked with mapping the caverns.

On one of his excursions, Kaylan is startled to hear a woman’s scream. After locating the source, he watches from the shadows as two men chase her down, swords drawn.

Kaylan realizes with horror that humans stand merely an hour’s walk from Balderdash. He faces a critical decision. Should he run away to warn the rest of the underground kingdom about the human invaders in the caverns, or risk losing his life—and compromising the location of Balderdash—to save the woman? 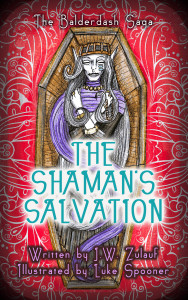 The very existence of Balderdash is hanging by a thread. The kingdom is under attack by vicious creatures called Mana Beasts, and someone is after the shaman.

Will Balderdash fall because of the shaman’s past actions? Will she lose it all, or will she sacrifice herself to save her people?

Join us in this coffin tale to find out the fate of Balderdash. This SPECIAL EDITION features all three of the short stories released in the BALDERDASH SAGA SHORTS.

It also features an exclusive 4th short story, available only in this special edition. Finally, it includes 12 exclusive illustrations. 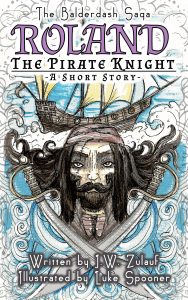 A pirate’s code is a fickle thing, and honor is relative in this short story that follows Roland the Pirate Knight.

Roland joins a misfit crew of pirates led by Captain Oakheel, who is trying to become the leader of the Bloodband Pirates. As Roland stands on the edge of a plank during this pirate action-adventure, he wonders if it will be water or deck that ends up below his feet Hurlock leads an army against the evil mage Kahster, who is hiding behind a strange fog that suffocates the small town of Ashcroft. As Hurlock fights his way toward the sorcerer, he is faced with a difficult choice: be a leader, or become lost in the fog forever. 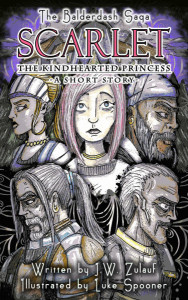 Scarlet wants desperately to save her deathly sick father. To do so she must team up with a mysterious man, who promises to help save him in return for a specific favor. What will the favor really cost her? Will Scarlet find herself a pawn in this man’s game, or will she really get the chance to save her father from his impending doom?